This post is part of our “Rossmoyne in the Community” series.

In early fall 2019, George Pondella, President of Rossmoyne, Inc., and David Fryar, Executive Director of the Los Angeles Police Museum, met to discuss a theme that had been increasingly at the forefront of the internal dialogue at the Police Museum: connection.

Tangible goals emerged: deepen the connection between the community and the police, better the bond with the public, and find relatable common ground.

An idea was conceived at the Museum, now an aging historic monument located in the former Highland Park Police Station building. The first step toward achieving those goals? Erect an exhibit showcasing and celebrating the tight-knit relationship between the officers and their companion service animals in the Bomb Detection K9 Section. Enthusiasm and support poured in.

Rossmoyne, Inc.’s corporate partners at The Home Depot and Ganahl Lumber answered the call to action. The Home Depot’s Ernest Kalmar and Kimberly Cherney were instrumental in securing over $11,000 in grant funding for improvements on the building, including the K9 Exhibit’s construction. Mike Caccavale at Ganahl Lumber contributed generously by providing materials crucial to the build.

Pondella explained the reasons for his company’s involvement: “We wanted to give back, to help a good cause, and to work with our friends at the Police Department to help realize their goals. We’re fortunate to have the kind of corporate partners who are also good friends. Ernest, Kimberly, and Mike were more than happy to be involved. They jumped at the prospect of giving their time and resources to this project.”

In late November 2019, the last construction worker had left and the dust was swept from the completed second floor exhibit. The Home Depot’s corporate reps, including Eddie Fishburne, Scott Jacobson, and Ernest Kalmar, visited the Museum for an exclusive tour by Retired LAPD Commander Bob Taylor, now a historical research specialist at the Museum. This was an enjoyable perk for a successful altruistic endeavor.

Rossmoyne, Inc. would like to send its sincere thanks to Ernest, Kimberly, and everyone at The Home Depot and to Mike at Ganahl Lumber for their willingness and generosity.

To celebrate the opening of the exhibit, a K9 team consisting of two officers and their service animals sat down with Sky Media Entertainment to chronicle their “Day in the Life” story:

Rossmoyne, Inc. is excited to continue its work in the community. More collaboration is in the pipeline, this time with Sterling Fields and The Parker Foundation at the Los Angeles Police Academy.

Rossmoyne in the Community

LET’S TALK ABOUT YOUR NEXT PROJECT. 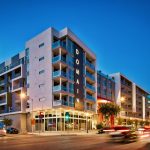